The green belt may be a British idea imported to China, but the concept has worked out to be very different in practice. In the context of Beijing’s urbanisation, it turns out that the local state uses the ecological discourse of the green belt to legitimate its land businesses. Despite the differences, we suggest that there are lessons from China for Britain. In 1958, Beijing saw the approval of its first modern master plan (Beijing-Archives 1958). The municipal government of Beijing proposed in this master plan that “the layout of urban construction should not be concentrated in the city centre anymore, and that a new style is needed with green spaces planned between decentralised conglomerates” (ibid). This marks the birth of Beijing’s green belt as an idea (or, maybe more accurately, a feature on a map).

The idea of Green Belt in Beijing also corresponded to the heydey of a socialist campaign named “The Great Leap Forward” during which the Chinese people were mobilised by Mao Zedong to “surpass Great Britain and catch up with the United States.” Among many targets of this ambitious campaign, “gardening the Earth” was set as a socio-ecological goal to achieve (Chen 1996). In this moment, Sir Ebenezer Howard’s modernist imagination of urban space and Mao Zedong’s socialist modernist vision of the country encountered and blended with each other. Through this encountering, the British-born planning canon was embedded in Beijing’s urban planning practices, which in turn produced a view of landscape including the green belt that mixed the revolutionary and the romantic.

For Chen Gan, then director of Master Plan Office in Beijing Urban Planning and Administration Bureau, a decentralised city layout including green belts could be a flexible tool to deal with rapid urbanisation and could direct urban development in a well-planned way in the long future (Chen 1996, 13-17; originally written in 1959). This partly explains why green belt has been set as an essential part of the urban area in Beijing since 1958. In practice, however, Beijing’s green belt existed more as a part of the master plan than real space for nearly four decades. In a letter written by Chen Gan in 1967, he admitted that suburban vegetable plots (more than 153.33 km2) had covered a majority of the planned green belt area. Beijing’s green belt had not achieved a romantic landscape of open countryside but was full of rural communities, residents, and their cultivated fields.

In 1994, the Beijing municipal government (BMG) focused once again on the green belt. Their new aim, familiar to the UK, was to prevent the sprawl of urban areas and to make the 240km2 green belt “really green” (BMG 1994). The BMG gave the market and capital a key role as villages located within the green belt were required to “use green spaces to attract investments, and utilise these for the exploitation of land, build green spaces in the exploitation process, and cultivate green spaces through green industry” (ibid; my italics). These policies can be summarised in a simpler way: the green belt was to make acceptable the promotion of real-estate development in the urban fringe.

17 townships and villages were included in the city’s green belt, they covered 95.23 km2 in total (39.7% of the planned green belt as a whole). In the following three years, however, only 8.62 km2 of this land was ‘turned into green’, while another 11.16 km2were expropriated by BMG for land businesses and infrastructure construction (Beijing Municipal Committee of Urban Planning, 1999). On the other hand, the area of farmland and vegetable plots in this area decreased significantly between 1993 and 1999 (down from 130 km2 to 61.82 km2), and a majority of this decline can be explained by the development of real estate projects (ibid). In this same process, 1.33 million square metres of residential houses were built and sold. The green belt was not “really green,” but became a part of the city’s urbanisation process and turned out to be a “really expensive” area to live in.

These outcomes made clear to municipal officials the potential values of land plots in the planned green belt area. From 2000 to 2003, another set of policies were proposed by BMG to enhance its ‘land businesses’. The “General Headquarter for Building Beijing’s green belt” was established in 2000, headed by then-Mayor Mr Liu Qi (BMG 2000). In 2002, the “General Headquarter” commanded that “related townships and villages are strictly forbidden to attract any investments for land development in the Green Belt” (BMG 2002). “All construction land plots,” they said, “that have not been used in the Green Belt area should principally be expropriated by BMG before any kinds of land transactions” (ibid). BMG’s ambition of controlling more land resources was further practised by proposing the second green belt in 2003 (with a total area of 1,620 km2, see the dark green area in Figure 1) and establishing a “land reservation mechanism” (tudi chubei) in the same year (BMG 2003). These policies together enabled BMG to gradually achieve and practice a monopoly of land supply at the city level (Beijing Municipal Bureau of Land Resources, 2011). 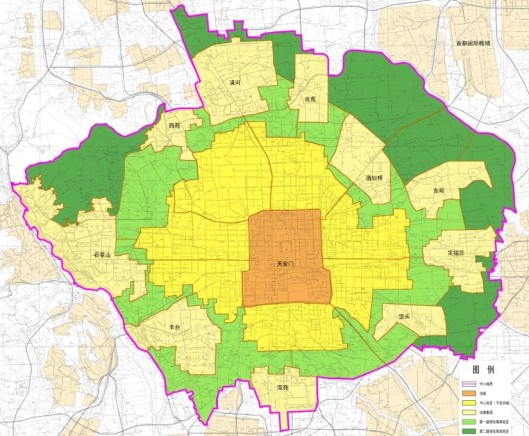 There is a rising conflict between making green belts and making money through land resources. In the case of Sunhe (one of a number of areas I’ve studied; see Figure 2 below), the landscape has lost out. The socialist-modernist vision of the urban landscape has been subordinated to capital flow. Plenty of proposals and projects are now put forward, by local government and real estate developers together, to promote land and housing businesses in the green belt. The label of green belt is retained more as a mask to legitimise these booming land businesses, and the interconnection between ecological discourses and political economic concerns looms large in this process. 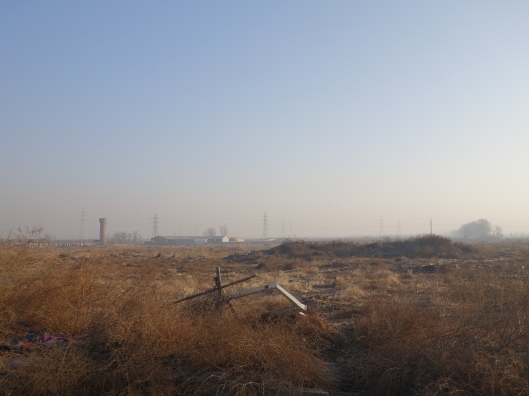 Figure 2. The invisible green belt in Sunhe  Source: photo by the author, 29/12/2014. Note: according to the master plan and regulatory detailed plan, this area should be a part of Beijing’s Second green belt. It is temporarily discarded because no privileged policies can be sought to run land businesses– but it will not take very long before such policies being figured out.

I now conclude with a lesson from China for Britain. Before arguing for the revising of green belts it would be wise to ask about the political and economic ambitions underlying these proposals. Who is raising them? Who benefits – will changes benefit present and future residents more than real estate developers? And, what other general effects on social justice can and should be identified? These questions are fundamental, and other issues such as (the control of) housing prices can be examined better when put into this political economic process.

Beijing-Archives. 1958. No. 1-5-253: Report on the Preliminary Urban Plan of Beijing. edited by Beijing Archives. Beijing.

BMBLR. 2011. The plan for protecting and utilising land resources in the 12th-Five-Year-Plan peirod. published by Beijing Municipal Bureau of Land Resources. Beijing.

BMG. 2000. Ordinance on speeding up the construction of Green Belt. published by Beijing Municipal Government. Beijing.

BMG. 2003. Ordinance on speeding up the construction of the Second Green Belt. published by Beijing Municipal Government. Beijing.

The right to the city